Latest News
Weight Loss Tip of the Day: “Keep the proportions, lessen the portions – serve meals on smaller plates!”         Tip of the Day: “Whatever the season that comes to stay, drink two litres of water every day!”
By Kate Partridge on April 19, 2020 in Diet

Few double entendres make English people titter more than the word “crumpet”. Trying to find out why it’s slang for sex or a “sexually desirable person” made me laugh more than I expected to while researching a small pancake. 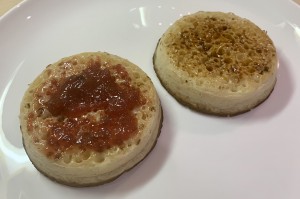 A bit of crumpet: a staple British bake for over a millennium

Cockney rhyming slang for “strumpet” is one answer. A cheap British tart is another. Being from the Black Country, I can avoid the issue altogether as we call them “pikelets”.

Smirks aside, the crumpet has been a staple British bake since Anglo-Saxon times. Made essentially from flour, yeast and water, the average 55-gramme pre-packaged crumpet yields around 98 calories (or 4-5% of the average daily intake of 2,500 calories for men and 2,000 for women).

Over a third of a crumpet’s nutritional value is made up of carbohydrate – which provides the body with energy – plus a little protein, fibre, salt and fat. But crumpets contain only trace amounts of calcium, iron, and vitamins B1 and B3.

As every person’s daily calorie intake should also include adequate nutrition, a crumpet is perhaps more treat than necessity but won’t do you any harm (and I’ll resist the urge for another double entendre).

But it’s worth stopping to consider the wider impact on the world’s waistlines and healthcare costs due to low nutrient density. This is the proportion of nutrients in food relative to its energy content.

So while food and drinks composed mainly of sugar (a type of carb), fats, oils or alcohol do supply energy, they provide little or nothing in terms of vitamins, minerals, protein, fibre, or essential fatty acids. These are known as “empty calories.” 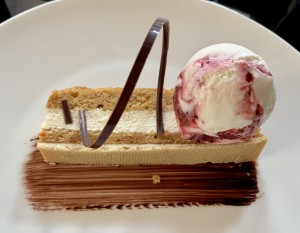 Delicious empty calories: beware overindulging in foods that are high in calories but low on nutrition

According to the old saying, a little of what you fancy does you good. Unfortunately, with around 40 per cent of the world’s population overweight and one in eight people obese, a lot of what you fancy is decimating people, health services and social care resources.

So what are the empty-calorie culprits? Sugary foods, such as cakes, biscuits, sweets, soft drinks, and sweetened fruit and caffeinated drinks, high-fat foods and alcoholic drinks – and usually processed food. The argument is that a diet high in empty calories will reduce the consumption of foods high in essential nutrients and fibre, leading to deficiencies.

On the flip side, people trying to lose weight could also suffer from malnutrition as they simply eat less empty-calorie food. While people with active lifestyles or on training regimes can eat more calorie-rich food, but should also consider their nutrition in terms of bodily maintenance and repair. In a nutshell, never skip nutrients.

American authorities generally advise a daily limit for empty calories at around 10 per cent of your overall intake. So if you are going to eat nutritious carbs, which ones are good for you? Quinoa, oats, buckwheat, sweet potatoes and bananas come highly recommended.

Human beings are not robots and, regardless of the world’s finest medical advice, will play out their emotions through food: how it stimulates the senses, provokes memories and symbolises status and aspiration. We don’t just eat – we have a relationship with food. And, like many relationships, they can be based on habit. For optimum benefit, it’s best to make these habits healthy.

My personal compromise is the humble crumpet. Topped with a little butter and a smear of Marmite or homemade jam. A source of carbohydrate, a few nutrients, no physical harm – and lots of happy memories of eating pikelets at Grandma’s. Perfect.

Face Taping to Save Face?
Rosemary and Raisin Soda Bread