Latest News
Weight Loss Tip of the Day: “Keep the proportions, lessen the portions – serve meals on smaller plates!”         Tip of the Day: “Whatever the season that comes to stay, drink two litres of water every day!”
By Kate Partridge on March 15, 2016 in Reviews 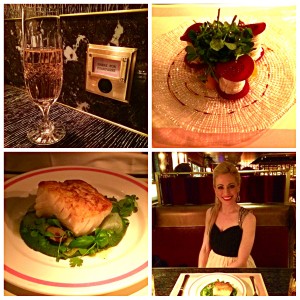 After more than four years in Moscow, I’ve now been back in London for almost two – and had somehow managed to miss iconic Anglo-Russian restaurant and champagne bar Bob Bob Ricard. The levels of irony are not lost on me.

Dining at the glamorous art deco venue is like spending an evening on the Orient Express, mixing classic opulence with subterranean cool. Uniformed attentive staff serve a luxury Russian-inspired Modern British menu and cocktails in an intimate all-booth dining room.

And, if you haven’t heard this before, every table is also equipped with a “Press for Champagne” button, with more bubbly famously poured here than in any other UK restaurant. Utopia in Soho.

Anyway, back to the night’s three challenges: to discover a suitable birthday venue for my dinner companion. Tick. Find an appropriately elegant dress (any excuse). Tick. And to follow a menu that suits a food combining or healthy diet. Make that a delicious and triumphant third tick.

We broke combining ranks only for a special birthday treat: Siberian caviar, served traditionally with smetana and blini – sour cream and small pancakes. The blini were so light and fluffy, it was worth it (a one-off!) but the dinner would have been just as impressive, and combined perfectly, without them.

Both my companion and I opted for the same protein-based starters and main courses. The entrees were wafer-thin beetroot and goat’s cheese salad with broad beans and mint, which complemented in taste, colour and texture the caviar that had gone before it. The main course that then followed was excellent. 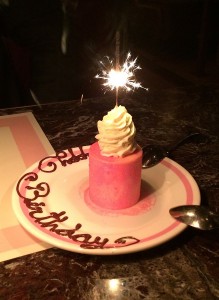 Happy birthday: a sparkling dessert to accompany the sparkling wine

We chose roast Norwegian cod – which melted in the mouth – garnished with fresh truffle, peas, lettuce, spring onion, aged balsamic and a pinch of curry, which added an extra dimension of flavour.

Side dishes of carrots and parsnips, roasted with honey and thyme, completed the spectrum of taste and nutrients as well as providing filling portions. Men, you will not go hungry.

Finally, as the staff knew we were celebrating a special event, they produced a birthday dessert, which tasted like strawberry dulce de leche and was fabulous, though alas we couldn’t finish it between us.

Three superb courses, champagne and minerals, the colourfully ornate setting plus the sparkling ambience meant our stomachs and senses were completely satisfied. A very happy birthday.

Bob Bob’s. So good, they named it twice.